Third Grad STEM students are currently "soaring" in their study of the SCIENCE OF FLIGHT.
They've been studying the learning arc that Orville and Wilbur Wright took on their journey inventing the first controllable aircraft. From observing the way birds fly (and turn), to tinkering with mechanisms and balance. From understanding the four forces that must be considered for an aircraft (or a bird) to fly, to building a working air foil - and testing it in a wind tunnel. 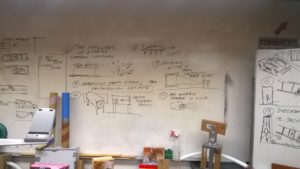 The first force to be studied was GRAVITY. The students constructed an airplane fuselage using a simple wooden ruler, and added a tail and nose for reference. They then hung paper clips at one end of the "fuselage", and plastic animals (endangered species needing transport back to their habitats), at the other end. By creating a balance point between these two weights, the students were able to identify the center of gravity of their aircraft (CG), and therefore, the location of their wings. 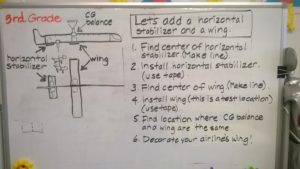 The second force to be studied was LIFT. The students constructed an air foil with a working aileron using foam board. The construction techniques learned (measuring, scoring, folding, creating a living hinge, etc)  will enable the students to create scale aircraft models that will actually fly. They completed the exercise by testing their air foil in a wind tunnel. 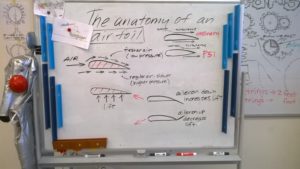 The third force being studied is DRAG. The students are currently creating a series of aircraft nose cone designs that vary from the most aerodynamic to the very least. And in the process, they are learning about the construction of the cone as a true form. In a matter of days, they will be testing their nose cone designs in a wind tunnel, and measuring the amount of drag for each.
The forth force to be studied will be THRUST. The students will study jet power (using toy balloons), propeller power (by building a whirly gig), and catapult power, (by launching a glider with a rubber band).  It is at this phase that the students will need to consider all four forces - to make their gliders FLY. 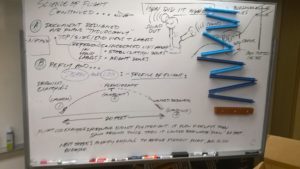